Now there is this cool Giant Angry Murder Hornets T-Shirt that is all about those bee killers.

This cool looking t-shirt is all about the Asian giant hornets that now have been seen in North America and they can kill up to 40 bees in a minute making them killer hornets.

This hornet t-shirt is available in styles for both men and women and it comes in a bunch of colors and in sizes Small – 10XL.

On the t-shirt you can find a honey comb in the background with on top 3 killer hornets and they brought their weapons including guns, chainsaw and ax. And then in top of it all it says “Giant Angry Murder Hornets”.

So warn the bees by wearing this cool killer hornet t-shirt.

This bee dressing up t-shirt is funny!

On the t-shirt you can see a bee and it seems to be completely black but to make it looks like a real bee it is adding some yellow tape that it is wrapping around the bee body so that it starts to look like a real bee.

You can get this funny bee t-shirt in men and women’s styles and it comes in many colors and in sizes Small – 5XL.

It’s a really funny t-shirt and that is a good reason to ad it you shirt collection and as we know that we have to save the bee this one could be the first one you save.

Get your Bee Dressing Up T-Shirt

What do you get when you have two bee’s dressed up as ghosts?

This is a very fun and cute t-shirt that features two bee’s dressed up as ghosts, find the bee bottoms sticking out in black and yellow aswell as wings and antenna with a little ghost costume on each bee.

Also find the saying “Boo Bees” in black and yellow print underneath the image of the two bee’s, this t-shirt is perfect for the informal halloween party or just any occasion.

Made from 100% cotton this is a durable and comfortable t-shirt that can be found in sizes Small to 2XLarge and check out all the different styles and colors too.

Get your Ghost Bees Boo Bees 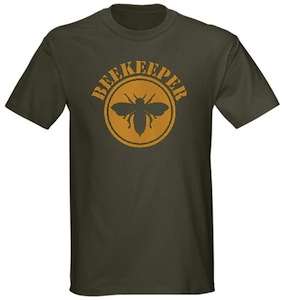 Bee’s are the busy animals in nature, always hoping from flower to flower. But who keeps those bee’s?

And of course this t-shirt comes in multiple colors and styles so check them all out.

Go get your BeeKeeper T-Shirt.