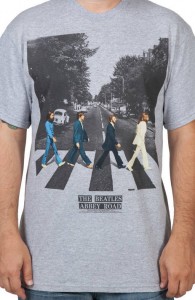 “Come Together”, “Here Comes the Sun”, and “Octopus Garden”. It’s 1969 in the United Kingdom and the 11th Beatles album has been released. To this day the Abbey Road album is still the Beatles’ best selling album.

This grey short sleeve t-shirt shows the cover of the Beatles’ album Abby Road. John, Ringo, George and Paul are shown crossing the road outside of the Abbey Road Studios. It is black and white except for the 4 boys from Liverpool, England.

It runs from size Small to 2 Extra Large and is suitable for both men and women.

Wear a piece of music history with your Abbey Road Beatles T-Shirt.

This site uses Akismet to reduce spam. Learn how your comment data is processed.